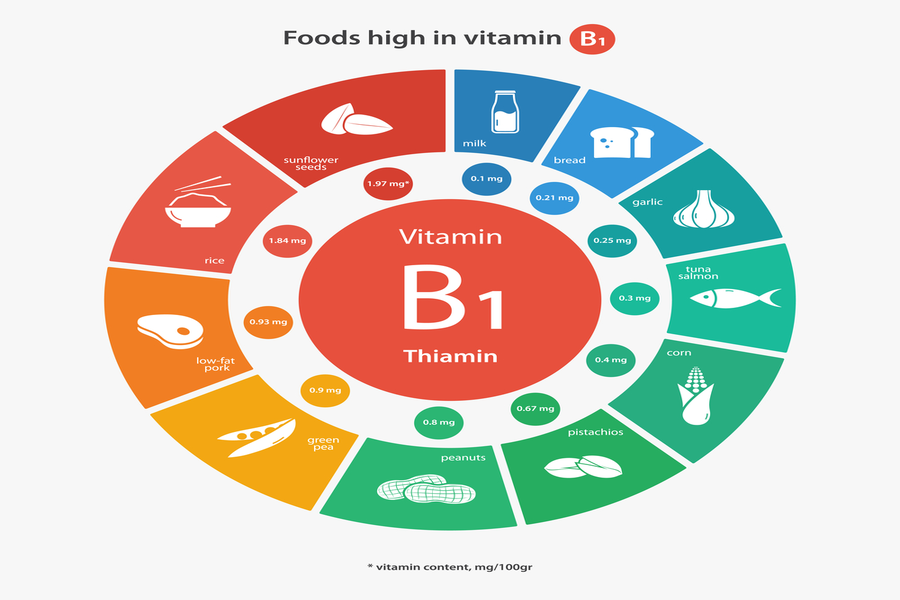 Do you Know Vitamin B1 was the first ever B complex vitamin to be discovered and also among one of the first vitamins to be ever discovered?

So, It is obvious Scientist and medical fraternity have invested enough time and energy to research it.

Vitamin B1 aka thiamin (or thiamine) is a water-soluble B complex vitamin.

It’s an Essential nutrient for the proper functioning and growth of several body parts, cells, and organs.

It also plays a vital role in maintaining a healthy metabolism.

This nutrient is naturally present in various food products and is added to some dairy products as well. It’s mostly taken along with some other types of vitamins.

Deficiency of this nutrient leads to a rare condition called “beriberi” which is also one of the first diseases to be caused by a nutrient deficiency.

We have dedicated this article towards discussing Vitamin B1 Benefits, Deficiency and best source of it.

Due to an adequate amount of Thiamin present in various types of food, vitamin B1 deficiency is pretty rare in the developed areas of the world. But still, people in developing or third world countries can face this condition and people with some behaviors and characteristics are more prone to this deficiency than others.

Insufficient intakes of thiamin are the common cause to this deficiency but apart from that thiamin deficiency can also occur due to conditions in which a person is not able to properly absorb and excrete the particular nutrient like “malabsorption”. And as already mentioned certain behaviors like alcohol dependence and having conditions such as HIV can make the condition worse. Some types of medications can also make the person more prone to this condition as well.

Beriberi is one of the most significant conditions that a patient with this deficiency suffers from. Beriberi is mainly characterized by wasting and peripheral neuropathy. Impaired reflex, motor, and sensory functions are some difficulties patients with this condition face. In severe cases, however, beriberi can cause heart failures that eventually lead to conditions like oedema in the limbs (mainly lower limbs) and in very serious cases it can actually lead to death. Beriberi though can be cured by adding supplements of thiamin into the patient’s daily diet.

Another condition after beriberi that patient’s with this deficiency can catch is called “Wernicke-Korsakoff” syndrome. People who have serious alcoholic dependence or indulgence are far more likely to manifest this condition than others. Patients with serious gastrointestinal conditions can also be affected and so are people with AIDS, drug indulgence, and a progressing condition called hematologic malignancies. Mainly patients face Wernicke-Korsakoff in two phases.

At first, the condition is acute and can be life-threatening, this condition is generally identified by peripheral neuropathy. Unfortunately, in the acute stage up to twenty percent of patients suffering from Wernicke’s encephalopathy dies, the patients who survive then manifest a condition called “Korsakoff”s psychosis, which is an outcome of chronic thiamin deficiency. Patient suffering from this condition usually faces disorientation, confusion, mixing up realities with imagination (confabulation), short-term memory loss and other cognitive difficulties. After reaching this stage about twenty-five percent of the patients are unable to recover back even after thiamin supplements and various treatments.

Let us understand What is Vitamin B1 Exactly?

Thiamin (C12H17N4OS+) is a water-soluble vitamin which indicates the requirement of it to be replenished over a relatively short period of time; it also belongs to the B complex vitamins. Apart from the name thiamin (or thiamine), it has been also called Aneurin in the past. Due to it being a water-soluble vitamin it’s required in an intermittent manner for it to show its magic such as maintain a proper blood level etc.

Thiamin is found in various food products in a moderate amount, but the food which has the highest concentration are pork, whole-grains, brown rice, nuts, peas, cereals, soybeans, etc.

How is Thiamin Formed?

Thiamin which is present in forms called “phosphorylated” is hydrolyzed via the intestinal phosphatases to produce free thiamin before the nutrient can be absorbed. Thiamin is also found in a free form that can directly be absorbed by the system. This nutrient is stored in a very limited quantity in the liver and as it’s a water soluble vitamin it requires frequent replenishment.

Best Sources of Vitamin B1

Food sources that are rich in thiamin are mainly whole-grains, pork, different kinds of meats, fish, nuts, and also some types of fortified products like cereals.

Let’s see some of the best sources from which you can acquire an adequate amount of thiamin and ensure proper health for yourself:

How much vitamin b1 should you take a day? Million question Right?

There are some Recommended Daily Allowances (RDA) stated by the organization taking in several factors and needs in the account.

The recommended dosage of thiamin depends on gender and age. It can also fluctuate due to certain behaviors and conditions like pregnancy and breastfeeding.

Here are the RDAs led down by the National Institute of Health (NIH):

Infants and toddlers (both genders) of

Pregnant and breastfeeding women are recommended a daily intake of 1.4 mg of vitamin B1 each day.

Now a very important question might come in your mind,

What are the side effects of too much Vitamin B1 or Thiamin?

Charles W. Marshall writes in his book “Vitamin & Minerals: Help or Harm”, There is no report of any toxicity associated with Vitamin B1 if taken by mouth. An upper limit is not determined by any Nutrition institute so far, But keep in mind one thing, Vitamin B1 is water-soluble vitamin means, It has the limitation of absorption. Unused Vitamin Vitamin B1 would be flushed out with urine.

So it is not wiser to invest money on supplements for taking higher dosages.

Vitamin B1 or thiamin is a water-soluble vitamin that is from the B complex family. Thiamin helps our body to function properly and improves metabolism and plays a role in the maintenance of the body.

Thiamin is absorbed in our small intestine and bacteria present in our large intestine also form some amount of this nutrient.

Thiamin in the form of phosphorylated is converted into free thiamin in order for the body to absorb it.

From cognitive functions to cardiovascular activities, thiamin has a part to play in all to ensure the best.

Although vitamin B1 deficiency is rare in developed countries, people with certain attributes and behaviors are more likely to suffer from it than others.

Beriberi and Wernicke-Korsakoff are the most known and significant condition a patient with thiamin deficiency is likely to suffer from.

Vitamin B1 is found in several food products, out of which whole grains, meats, fortified and dairy products has a higher concentration of it.